If you have walked or driven by Frederick Douglas Avenue lately, you may have noticed a lot of work being done on the street and the building. Many people I have asked thought they were just making improvements but when I tell them about a big name director along with some big name actors and that a movie is going to be filmed there, they become excited. The building has new signs or should I say time period signs on storefronts from the late 1960s. One of the signs is TV LAND. When was the last time you saw a storefront sign for TV.

Kathryn Bigelow is a Big Hit director who won academy awards for her movie The Hurt Locker from 2008. She has been directing since the 1980s and has other hit movies such as Zero Dark Thirty(2012), Point Break(1991) which start Patrick Swayze and Keanu Reeves, Strange Days(1995), k-19.The WidowMaker(2002) and numberous other movies in which most are action and thriller genre. Her latest movie is about the 1967 Detroit riots.


Taken from Wikipedia "The 1967 Detroit riot, also known as the 12th Street riot, was a violent public disorder that turned into a civil disturbance in Detroit, Michigan. It began in the early morning hours of Sunday, July 23, 1967. The precipitating event was a police raid of an unlicensed, after-hours bar then known as a blind pig, just north of the corner of 12th Street (today Rosa Parks Boulevard) and Clairmount Avenue on the city's Near West Side. Police confrontations with patrons and observers on the street evolved into one of the deadliest and most destructive riots in the history of the United States, lasting five days and surpassing the violence and property destruction of Detroit's 1943 race riot. 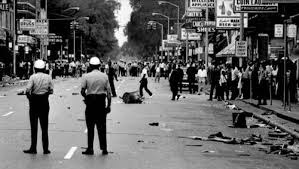 To help end the disturbance, Governor George W. Romney ordered the Michigan Army National Guard into Detroit, and President Lyndon B. Johnson sent in both the 82nd and 101st Airborne Divisions. The result was 43 dead, 1,189 injured, over 7,200 arrests, and more than 2,000 buildings destroyed. The scale of the riot was surpassed in the United States only by the 1863 New York City draft riots during the U.S. Civil War,[1] and the 1992 Los Angeles riots. The riot was prominently featured in the news media, with live television coverage, extensive newspaper reporting, and extensive stories in Time and Life magazines. The Detroit Free Press won a Pulitzer Prize for its coverage."

The movie is starring some familiar and hot movie stars of today including Will Poulter of The Revenant, The Maze Runner, We are the Millers, John Boyega of Star Wars:The Force Awakens, Anthony Mackie of The Hurt Locker, Captain America, Triple 9 and about 12 other movies,Jack Reynor of Transformers, Sing Street, Jacob Latimore of The Maze Runner, Hannah Murrav of The Numbers Station, The Chosen and Womb. Filming is expected to start toward the end of September and is expected to last about 6 days. The filming is going to be one of the largest movies filmed in Brockton and they are in need of 300 extra's. CP Casting of Boston is the company doing the casting. So here's to Brocktonwood.