RON MATTA WANTS TO CLEAN UP THE STREETS OF BROCKTON 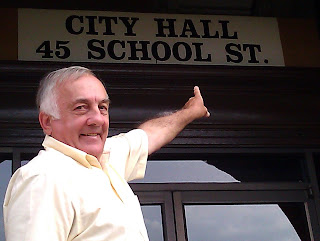 Faced with budget cuts from the State and Federal level I asked Ron where will Brockton get the money? "I will look at our budget from top to bottom and find waste and place that money into the police budget, as I talked to many people and the Seniors they all have expressed to me why haven't we taken it serious about are police levels. I am fed up with the crime and the residents are fed up with it, I have asked myself this question over and over again, if crime is high and not enough police then the answer is simple, put more police on the streets. It is not rocket science."

"Good people are leaving our city and the one's that can't leave are afraid to leave their houses after 9 p.m. at night. We need to give our men and women in uniform the best tools to fight crime and one of those is more police on the streets for our safety and theirs."

"There is no excuse that we have to make this our number one priority, people are afraid, businesses are not coming to town and residential developers want a city where they know their tenants and the people who buy these residences will be safe, that is a major selling point for developers when we have a city that has enough police to protect us."

The recent water billing problem at the DPW how has that affected you and your decision to run for Mayor. "Personally I have talked to many residents with billing issues and people who have liens on their homes. I am outraged how a city has blamed the residents for this problem and how it took a group of fine and dedicated residents to step up and fight City Hall to help rectify this situation, I believe if it wasn't for them that it would of been swept under the rug and this encouraged me to fight for the residents to see what other waste and money we are loosing in this city. Government employees should not use their jobs to make their own laws to protect themselves. They cant hide and not meet with the residents when they are losing their houses. I feel this is just the tip of the iceberg and I will look at all departments, line by line to see that something like this never will happen again. I will look into mismanagement and hold those responsible for such lack of insight accountable."
That is just one of Ron's agenda on what he plans to do if elected Mayor of Brockton. Ron's other plans for Brockton are:

1) Put more police on the street to make city safe. Increase Code Enforcement so we can hold businesses and property owners responsible for the blight that decrease the value of Brockton.

2) Will encourage business to come to Brockton using public safety as a means to attract developers and new businesses.

3) Will make city government accountable to the people.

4) I will not be an invisible mayor. My door and telephone number will always be available. No screened questions, tell me what it is and I will try to help.

5) Listening to the residents about the proposed power plant and overwhelmingly opposing the need for such a plant so close to schools and a residential area.

If you would like to put a sign on your lawn or volunteer for his campaign please get in touch with him at MATTAFORBROCKTON@YAHOO.COM